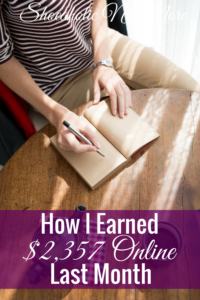 Wow! My first month + of full-time freelancing has gone super fast! And to be honest, I spent a lot of the first month of self-employment in yoga pants and pajamas. It was amazing!

August was really a month of catch-up on life. I still did quite a bit of work, but I also spent quite a bit of time on myself. I got some extra sleep by going to bed a little earlier and sleeping a little later. I also took the occasional nap when my body told me it was tired.

But for now, I want to share my online income from August with you.

Although my income was down a little bit from July, I’m still pretty happy with it. As I said, I took a little more time for myself last month and thus I’m ok with a little bit lower income level for August.

Here is a breakdown of how I earned my money:

My income was down a little bit from July, but I had a better work-life balance which was nice! I didn’t have a lot of changes to my client list in August, but I had some big changes in September, which I’ll talk about in my September income report next month.

As I said in my post yesterday, when you are a solopreneur you have to keep hustling, even when you think your client list is full. This gives you more freedom to decide who you work with and what you charge for your services.

Even thought my income was down a little bit, I beat my August goal, which was $2,000!

As always, you need to know that I don’t count my online income until the month it gets deposited into my account, so this is from some work at the end of July through about mid-August. I have made some more since then, but it will be included on my next report since it didn’t hit my account until September 1st (or later).

Remember, that my online income has not yet been taxed, which means that about 30% of what I make is going to be taken by Uncle Sam, and another portion of my income will be used for expenses, like internet, computer repairs, tech services, my staff writer, and PayPal fees. Additionally, I’m saving some of my income to be used for FINCON15 and other business expansion projects in the future.

I’m going to set my September income goal at $2,500. This will be my highest income goal yet.

Here are my other online income reports to-date:

Did you make any online income in August? Is there anything else you’d like to know about how I run my business or make income online? Let me know, I’d love to help you out! 🙂

Fill out the form to watch my free webclass and get started today.