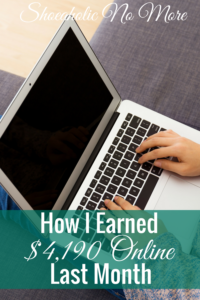 You know how I said September was the best month ever? Well I topped it in October!

I never imaged that I could grow my business to the point where I’d be making over $4,000/month all from the comfort of my home (and my PJs and/or yoga pants). 🙂

It feels absolutely amazing to have typed that number – $4,190 – and to think that I earned that amount of money in only 31 days. I know this is still a pittance compared to the earnings of some people in this world, but for me this is absolutely amazing!

Here is a breakdown of how I earned my money:

As mentioned, October was my highest earning month yet and I beat my income goal for October which was $3,000. 🙂

Since the end of October, I’ve been trying to narrow my focus a little bit. One thing I’ve done is cut a few clients in order to free up more time to focus on my own brand and business. I love working with my clients, but at the end of the day there isn’t much time left to write for myself and focus on my own blog and brand.

As always, you need to know that I don’t count my online income until the month it gets deposited into my account, so this is from some work at the end of September through about mid-October. I have made some more since then, but it will be included on my next report since it didn’t hit my account until November 1st (or later).

Remember, that my online income has not yet been taxed, which means that about 30% of what I make is going to be taken by Uncle Sam, and another portion of my income will be used for expenses, like internet, computer repairs, tech services, my staff writer, and PayPal fees. Additionally, I’m saving some of my income to be used for FINCON16 and other business expansion projects in the future.

I’m going to set my November income goal at $3,700. This will be my highest income goal yet.

Here are my other online income reports to-date:

Did you make any online income in October? Is there anything else you’d like to know about how I run my business or make income online? Let me know, I’d love to help you out!

Fill out the form to watch my free webclass and get started today.